Of wijn nou echt gezond is 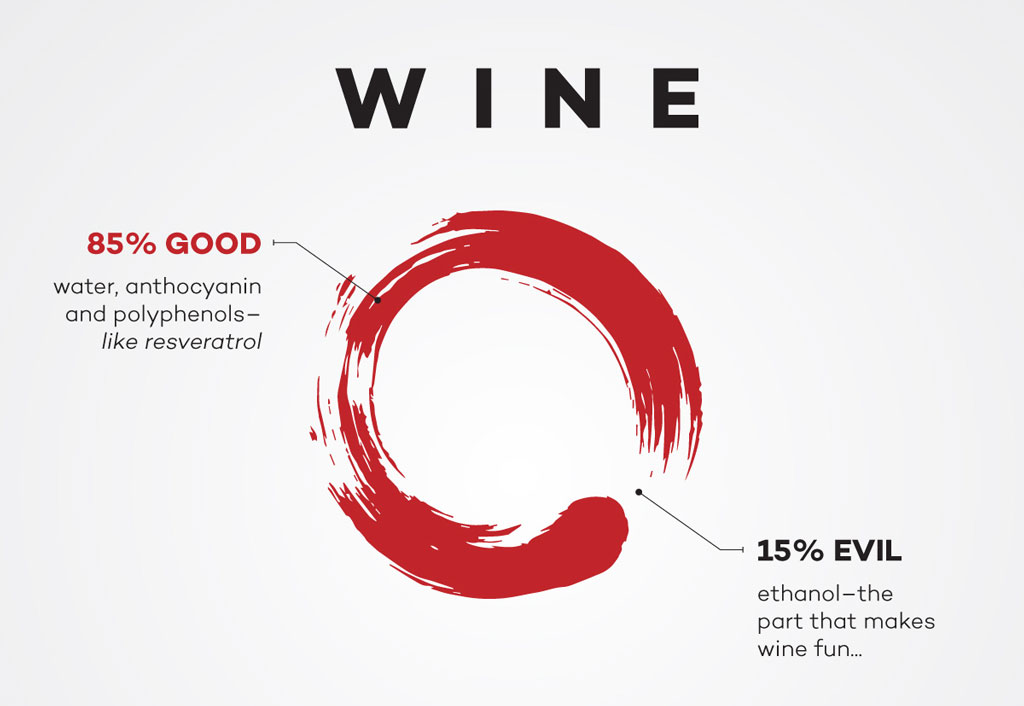 To really answer the question of whether or not wine is healthy, you need to look at what’s inside a glass of wine.

*85% GOOD: Most of your glass includes stuff like water, anthocyanin (an antioxidant), and polyphenols (including tannin and resveratrol). All of these ingredients have been shown to be good for you.

*15% EVIL: The freaky-deeky side of wine. Technically speaking, wine has anywhere from 5.5%–21.5% “evil” in the form of alcohol. Alcohol or ethanol happens to be a neurotoxin (it’s what makes you tipsy!), and when it’s metabolized in your liver it turns into a carcinogen called acetaldehyde. Of course, non-alcoholic wine is not as fun to drink.

What’s inside wine?
The calories in wine come from alcohol but wine contains some other things of interest. Here’s a quick reference guide what’s inside a bottle of wine.

Fortunately, if you’re hoping to keep your drinking habit at a healthy level, moderation is the secret.
Moderate Drinking Wine Habit is good for you
The Definition of Moderate Drinking in the US

You might be wondering why men can drink more than women and there’s actually a scientific reason for this. As it happens, men have more of the enzymes needed to metabolize alcohol than women do by about a factor of two.
What’s the maximum amount I can drink in one day?

If you like wine, you’re going to let loose from time to time. I get that. But if you want to stay under the dreaded “excessive drinking” daily limit as indicated by the Dietary Guidelines for Americans (2015-2020) here’s what you should try to stick to:

*No more than 3 drinks in a single day for women

*No more than 4 drinks in a single day for men

Do you get “red flush” when you drink? This happens usually just after one drink or less and sometimes make you break out in a rash. Some people even think they’re allergic to alcohol because of this reaction. More than likely you have an acetaldehyde dehydrogenase deficiency, which means acetaldehyde builds up in your system quicker than others. It also makes you feel nauseous quicker too! If you’re curious to know if you have this deficiency, I found a pretty informative lineage chart on Wikimedia commons:


Basically, if your ancestral lineage contains one of the 2 green colored gene variants of aldehyde dehydrogenase, your body is more efficient at making acetaldehyde than people with the yellow gene variant. More acetaldehyde means more sick to your stomach and more carcinogen in your body. This means, your wine intake should be lower than the norm.


Stick To Your Limits

After doing the background research for this article, it’s easy to accept that moderate drinking is the key. So, inspired by my own work to prove moderate drinking is possible, I made a resolution (started December 15) to be a moderate drinker in 2017. A lot of people have told me that it’s impossible to do and that “no one sticks to their limits” and I want to prove these naysayers wrong. I think we (wine drinkers) are the healthiest drinkers on the planet.


Up Next: The Benefits of Wine

What you should be drinking (and how much) to promote a healthy wine lifestyle. Turns out, if you stick to the moderate drinker lifestyle there are some major benefits.
Why Wine Will Make You Skinny, Happy, and Wise