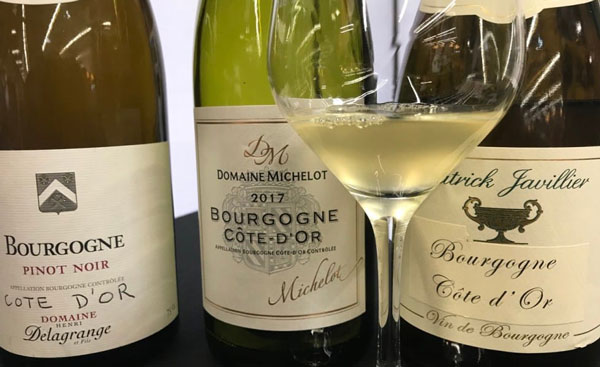 ‘Sylvain Dussort, from Domaine Sylvain Dussort in Meursault, explains: “The project to get Bourgogne Côte d’Or recognised as a Régionale AOC with geographic denomination goes back 20 years when four winemakers, including myself, got together because you could be drinking a wine from Chablis to Mâconnais that was called Bourgogne Blanc or Rouge, but we felt that producers in the Côte de Beaune or Côte de Nuits needed a special appellation, because their wines were different.”

Dussort highlights the particularities of a Bourgogne Côte d’Or, which relate to the aspect of the vineyards. “The Côte d’Or takes its name from a shortening of the word Orient, because the slopes are east-facing, and that’s what makes our wines different from Bourgogne Blanc and Rouge.” He adds: “There may be a lot of awareness for the Côte d’Or, but there’s no longer official classification.”

Patrick Javillier, from Domaine Patrick Javillier, was another instrumental figure in the establishment of the new appellation. He gives a further motivating force for its creation. “When I started at the domaine 45 years ago, half of the producers in the Mâcon would declassify their wines and say they were Bourgogne Blanc, so we wanted to make the distinction between the wines from the Côte d’Or and the Mâcon.”

It was for this reason that, 45 years ago, Javillier launched a new white wine from his domaine, blending grapes from different parcels, which he called Cuvée des Forgets. This was followed 15 years later by another, which he named Cuvée Oligocène.

“We did this out of necessity,” he says, referring to the need to find a point of difference for these wines, which were high quality but were classified as Bourgogne Blanc.

Both have kept their respective names, but now carry the appellation Bourgogne Côte d’Or, signifying more clearly their source area.

Meanwhile, Dussort says the impact of the appellation has already been positive, and surprising in its strength.

“Since we started using Bourgogne Côte d’Or we have found that demand for our wines has increased.”

He also makes the point that the appellation comes with stricter rules than those for Bourgogne Rouge or Blanc, with producers having to meet tougher rules on planting density and yields. The area for the new classification is also limited to the lower slopes of the Côte d’Or.

Currently, such a production area offers a potential of 1,000 hectares of Pinot Noir for reds, and Chardonnay for whites.

However, the launch vintage, the 2017, has seen around 300 ha of wine that was previously classified as generic Bourgogne Rouge and Blanc become Bourgogne Côte d’Or, with 200ha used for whites, and a further 100ha for reds.

In short, the region needed a new tier to differentiate the wines from sites that were superior to the flattest parts of the Côte d’Or, but couldn’t carry the names of the many famous villages along this famous east-facing part of Bourgogne. A step up from Bourgogne Blanc or Rouge in terms of sourcing and managing, they required recognition of their superiority.

And with Bourgogne Côte d’Or that is assured – after all, this is a geographic descriptor that wine lovers the world over associate with quality.’