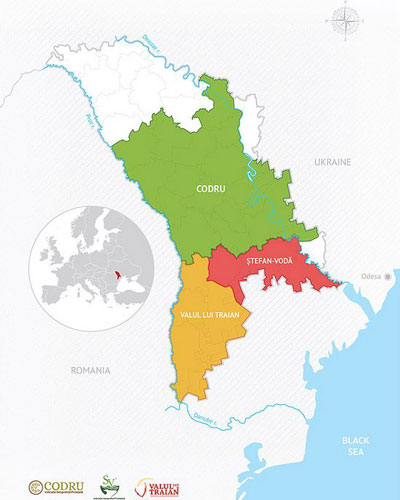 While trying to expand to new markets such as Afghanistan, Syria, Togo and Guam, some less usual markets such as Australia, Norway and Libya, Moldovan exports were also targeted to some traditional markets such as Romania, Ukraine and Belarus. Throughout 2019, Romania continued to be a strategic market for the Moldovan wine, both by volume of exports and by revenue generated.

The increase in volumes of bulk wine for export is due to the fact that the grape harvest was above the annual average in 2019.

The figures show that Romania, Poland, Russia, China, Czech Republic, Ukraine, Belarus, Kazakhstan, Canada and the USA are the top 10 countries where the Moldovan wine and wine products are exported.

The portal described Moldova as following:

“This small but perfectly formed nation nestled between Romania and the Ukraine is a beguiling blend of bucolic countryside, magnificent architecture, fascinating history and rural charm. What’s more, Moldova is also the home of some of Europe’s most ancient and fascinating wine culture, home to the biggest underground wine cellar in the world and over 150 wine producers of all shapes and sizes. Moldova’s unspoilt natural beauty, incredible local food and wine alongside world-beating hospitality which makes any visitor feel like a member of the family in a matter of minutes. Providing the warmest of welcomes is so important to Moldovan culture that ‘Be Our Guest’ has become the slogan of the country’s tourism board!”