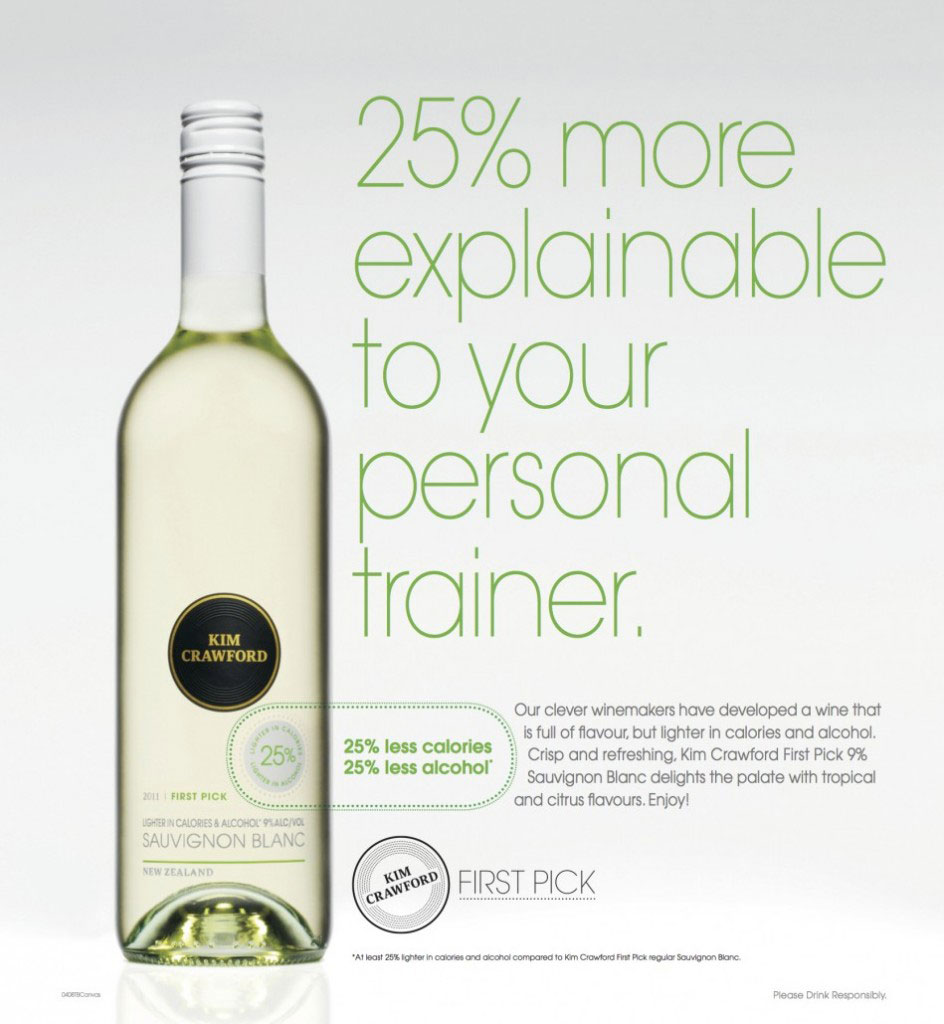 During the 1980’s and 1990’s some wine critics propagated dark coloured, full-bodied, heavy red wines. This was exemplified by tannic wines with relatively high alcohol content. The use of phenolic ripeness as criterion for harvesting contributed to this phenomenon. These wines were usually medal winners, but were not necessarily favourites of public consumers. Over the last few years pressure is internationally applied to produce wines with lower alcohol. Traditional Bordeaux and Burgundy wines with alcohol levels between 12.5 to 13.5% have consequently become popular again.

The alcohol content of Californian Napa Cabernet Sauvignon wines increased from an average of 13.2% in 1981 to an average of 15.2% in 2013. A research survey by the Californian wine giant, E&J Gallo, found that persons between 25 to 45 years are interested to experiment with wine and other alcoholic beverages by adding fruit, sparkling water and ice to it in order to develop wine based cocktails.

In 2007 market research by the Californian cellar, Francis Ford Coppola, in the United Kingdom found that 28% of the respondents were concerned about the alcohol content of the wines they buy. The same research found in 2013 that the percentage of concerned respondents increased to 40%. This confirms the international concern about wines with relatively high alcohol content. The most important reasons for the concern are health, social responsibility and the taste of the wine, but countries like the United Kingdom (UK), New Zealand and Scandinavian countries adjusted their tax structures according to the alcohol content of the wines and also restricted the marketing and promotion of high alcohol wines.

The New Zealand government initiated partnerships with 17 wine cellars to research the production of lower alcohol wines without the addition of water or using alcohol reduction technology. The research program will last for 7 years and NZ$ 13 million was budgeted for it. Both viticulture and cellar procedures will be addressed. The challenges in the vineyard will be to produce grapes with lower sugar concentrations, without having natural higher fixed acid concentrations. Sites that naturally produce lower acid grapes must be identified and viticulture practices like lower leaf-grape ratios, irrigation, fertilisation, yield and Botrytis options will be investigated. Water addition prior to alcoholic fermentation or to wine is not permitted in New Zealand and alcohol reduction technology like reverse osmosis and spinning cone are seen as too expensive for low alcohol wines. Cellar practices like the harvest time, pressing, the termination of alcoholic fermentation to ensure balanced wines, yeast selection and temperature control will consequently be investigated. As a result of the cool climate of New Zealand, the production of typical cultivar wines with the necessary balance and an alcohol content of 9% is definitely possible.

In order to investigate the viticulture and cellar practices for the production of lower alcohol wines, the definition of wines with a lower alcohol content needs to be clarified. The origin of the wine is playing a determining role in this regard. The cool climate of New Zealand lends itself to the production of balanced wines with an alcohol content of 9%, in comparison to a low alcohol of 13% in California, which would otherwise have been 16%. It will however be wrong to focus only on the alcohol content, because the sensory alcohol of alcohol correlates with other wine components. The primary aim should consequently be the production of balanced wines. Total acid, pH, flavour complexity, tannins, sugar and carbon dioxide concentrations all contribute to it. Alcohol contributes to the body of wine and can also emphasise the observation of tannins. Sweetness can soften the perception of both acidity and tannins and can also create the impression of full-bodied mouthfeel. Acids and tannins amplify each other and carbon dioxide also contributes to the mouthfeel of wines.

If a cellar considers the production of lower alcohol wines, certain policy decisions have to be taken before actions are initiated in the vineyards and cellar, such as:

Different possibilities can also be investigated in the vineyard to produce lower alcohol wines:

*Sites producing grapes with lower fixed acids must be identified, for example those with hot nights above 21°C and lower diurnal fluctuations.
*Irrigation after veraison must be limited. This will push the vine into senescence and develop earlier tannin formation.
*Fruit must not be thinned too much. A higher yield will assist faster fruit ripening.
*Laterals must be removed.
*Canopy must be limited, because direct sunlight into the fruit zone will promote the breakdown of malic acid during ripening.
*Leaf-pluck must be applied in the fruit zone, unless heat waves threaten sunburn.
*Regular berry tasting can initiate the picking of early lots.

-The addition of untoasted oak dust or shavings at the destemmer can limit the observation of green flavours in red grapes.
-If thermovinification is used in red wine macerations, the sugar content of the juice can be increased between 1.0 to 1.5 degrees Balling.
-Alcoholic fermentations at higher temperatures can decrease the alcohol content of the wine between 0.25 to 1.0%.
-Similar decrease can be obtained if open fermenters are used.
-If malolactic fermentation (MLF) is not applied, yeast which can break down malic acid can be used.
-In case of white wines with a high fixed acid content, the alcoholic fermentation can be terminated to leave sufficient residual sugar for better balance in the wine with a lower alcohol content. In such cases the necessary precautions must be taken to prevent the re-fermentation of the wine.
-If alcohol reduction methods like the spinning cone or nanofiltration are considered, trials must be executed to ensure that the necessary balance is there.
- Modern tannin products, which can be used to remove the green character from wines, will also help that the influence of the alcohol content on the body of the wine is not so obvious.